What is the Point

Politics Are Not My Religion

What is the Point

This is a devotional I shared January 14, 2020 with my fellow staff members at Alamo Heights United Methodist Church.

On January 14th, 1991 the United States Congress passed Public Law 102-1 which authorized the use of U.S. military force in the Gulf War.

I was a 21 year old Bible college student approaching my final semester and working at a small photocopy shop in downtown Pasadena, California. If we rewind to January first, I joined the throngs of people who flocked to Colorado Blvd to watch the Tournament of Roses parade. I stood amazed at the revelry as floats covered in a vast array of flower petals and organic materials passed before my eyes. College and high school marching bands filled the downtown corridor with a reverberation of sound and rhythm. With awe and bewilderment I watched a celebration unfold, the likes of which I had never seen outside of our small family tv screen in rural Oklahoma. For a brief moment it seemed the public set aside the stress and fear of the imminence of war.

Two weeks later President George H.W. Bush signed the bill and the news broke. We were officially going to war. An odd and eerie feeling came over me as I pondered the meaning and ramifications of war. Though I was alive for part of the Vietnam war and had family members who had served, I felt that was one of the factors that separated men from boys..but this was different. This war would be fought by people my own age. I later discovered I had friends and family who were deployed to serve in Operation Desert Storm.

I felt different inside, partially numb, partially afraid and largely isolated despite being surrounded by 10 million people. I walked the sidewalk along Colorado Blvd, where the joy and celebration from two weeks before was replaced with a sense of defiance, engulfed in a cacophony of silence. I felt as if I were a spectator, watching as the scene before me unfold in slow motion. In an instant I was jolted out of this almost trance-like state by the sound blaring from a car stereo……War!...... What is it good for? Absolutely nothing!..Say it again..War!

On that January day in 1991, I was different, my world was different and I knew it would be changed forever. In those days before the internet, news was primarily obtained from TV, newspapers and radio. During my work day I often walked by newspaper stands filled with the Los Angeles Times. The current headlines began to solidify and make real the changes I was feeling. Many of the stands had slots below that held posters for advertisements or additional headline emphasis. One day I passed the stand as a simple yet profound poster caught my eye. It contained white block lettering on a reversed black background. I looked around to see if anyone was watching, slid the poster out of the slot, rolled it up and kept walking. 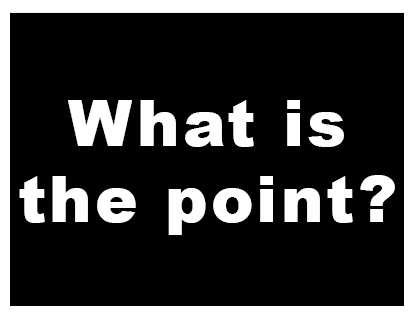 (**Don’t judge me! Maybe we should visit what some of you did in college?)


Little did I know at the time but I would dwell on the profound simplicity of this poster for years to come and still do to this day. While the original context served as a cynical antiwar sentiment, I have often used it like a compass to point me in the right direction.

It is a question with almost unlimited answers and responses and if we fast forward 29 years to today, January 14, 2020 as each of our journeys bring us together to this space, and to this place in time let us ponder. What is the point.

In the constant bombardment of a 24 hour news cycle it doesn’t take long to see there has been little to no change in the Middle East as tensions continue to escalate. However, that is not my point today. We all know 29 years is a drop in the bucket of a 5000 year conflict.

I would like to look at a scripture that has been meaningful to me much of my life. In 1 Corinthians 13:12 Paul writes. Now we see but a poor reflection, then we shall see face to face. Now I know in part, then I shall know fully even as I am fully known. I have taken this scripture to say we don’t see the whole picture and we don’t know the whole picture. In other words we do not see or know as God sees and knows and in time we will see God face to face. This is a fair and safe translation but what if there is more to gain? Paul wrote this to the church in Corinth who had become somewhat out of focus by placing more importance on a couple of spiritual gifts. He brought the point the body is comprised of many parts and all have a place and all have significance. Without each part the body would not function properly.

As an artist, I have spent the majority of my adult life learning how to see. Whether it is repetitious patterns, contrasts of light and dark, or highlight and shadows, it takes time and effort to learn to see what is around us. To illustrate this point have any of you ever seen the sky turn green during the sunset?

(**Also known as a green flash. Here is a description from EarthSky.org. The green flash is the result of looking at the sun through a greater and greater thickness of atmosphere as you look lower and lower in the sky. Water vapor in the atmosphere absorbs the yellow and orange colors in white sunlight, and air molecules scatter the violet light. That leaves the red and blue-green light to travel directly toward you. Near the horizon, the sun’s light is highly bent or refracted. It’s as though there are two suns – a red one and a blue-green one – partially covering each other. The red one is always closest to the horizon, so when it sets or before it rises, you see only the blue-green disk – the green flash..)

Another translation says we see in a mirror dimly. This is likely a reference to pieces of polished bronze which at the time were used as mirrors. Stop and think for a minute. What would the world be like if we didn’t have mirrors. What or whom would you look at? How many of you looked in the mirror this morning? Can you imagine what it would be like if you didn’t know what you looked like? Perhaps more time would be spent seeing those around us and knowing them more completely. Knowing fully as we are fully known.

The translation seeing in a mirror dimly piques my interest. In photography dim lighting can be employed in a variety of ways such as to create mystery, for enhancement, to bring out beauty and delicacy or to hide and minimize faults or blemishes. Even though we like to see fully we don’t always like to be seen fully. We often like to dim the lights to blur or hide our own faults. How would it change our outlook if we saw each other fully? Would we still love each other? Would we even continue to like each other?

I would like to finish with another personal story so you may know me more fully. One of my former employers was a rather rigid man who was prejudiced by many things, especially physical appearances. I had just shared a couple of photos of myself from my wedding day with a couple of coworkers. When my wife and I got married, my hair was a little longer than it is now, falling just below my collar and landing at the middle of my back. As we shared the novelty of laughter and disbelief my boss came by the office door. There were times he could have a really good sense of humor and someone asked if he wanted to see a couple of funny pictures of me. I told him I would show him the pictures if he promised they would not change his perception of me. While I was slightly joking, I was a bit surprised he chose not to look at the pictures.

So What is the point? Paul goes on to write in verse 13 now these three remain..faith, hope and love but the greatest of these is love.